First of all we have a winner for January Blogger BOM. That lucky follower is Scrapbook-ChickADoodle. I have emailed her and will be shipping her 100 2.5" fabrics squares as soon as I get her address.
I also took some more pictures of Megan's Baby quilt to get some shots of the back and the binding. I ended up cutting these owls in the wrong direction so that's how the ended up on the back. I love the binding on this quilt. I can't remember where I got it and I only bought a quarter yard. Turned out to be perfect for this quilt and was just enough. 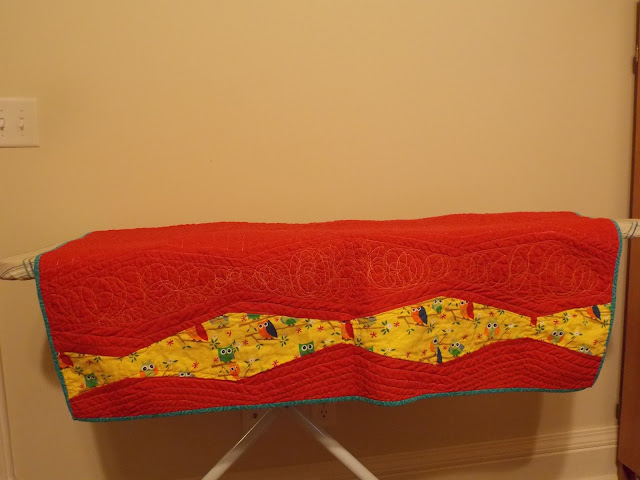 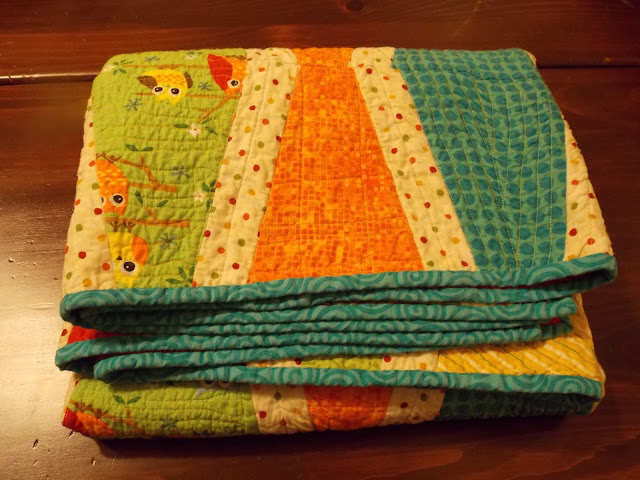 Other big news this week is this week is that we added a new critter to our family. Our dog Vinnie hasn't been doing great and my beagle Daisy is very close to him. Vinnie has a tumor in his ear as well as alot of other health problems. We decided that we weren't going to pursue surgery with Vinnie. Since he and Daisy are so close we decided to add a new addition to our family to make the transition easier on Daisy. We looked around and came across someone who had a litter of English Springer Spaniel puppies. My Uncle Tom had one of these dogs when I was growing up and I always wanted one. So this little guy has been chewing and pooing his way into our hearts, his name is Turkey. Daisy has been a very patient big sister. 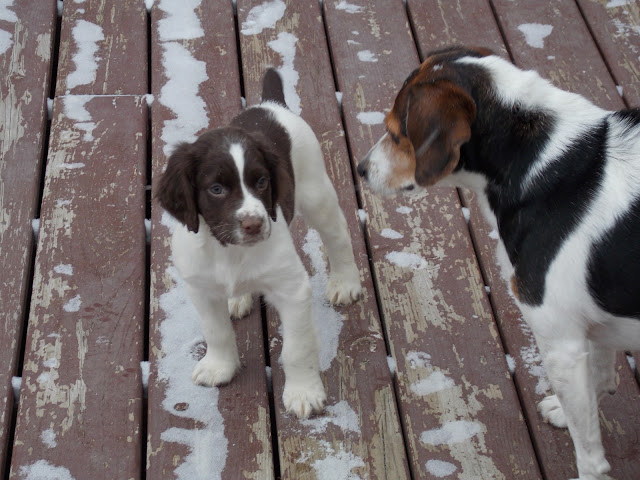 I grabbed some remnant fleece from Joanne's yesterday. I use it to make some doggie chews from this tutorial here. They turned out really well and the dogs love them. Very easy to whip up while watching tv. 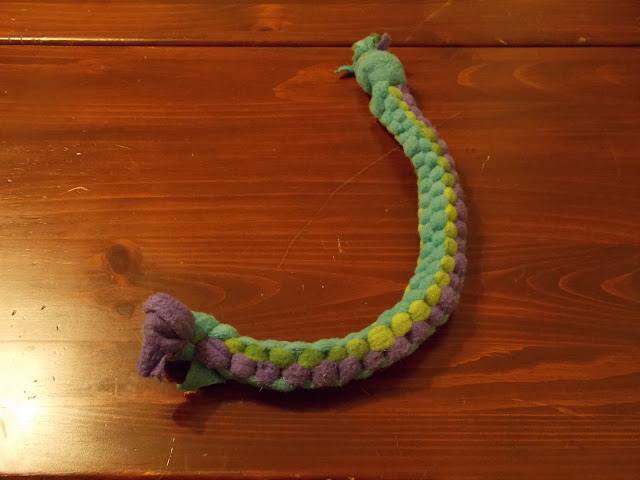 On the quilting front I am working on this baby rag quilt for Paru's baby girl who is about 2. She saw one that I made for Elizabeth's foster baby and fell in love with it. I made this one for her daughter with the cutest fattest bumble bees. I need to snip the seems on this one.... 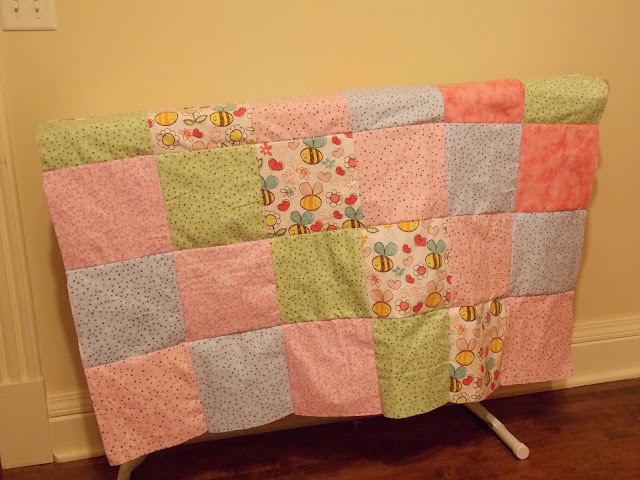 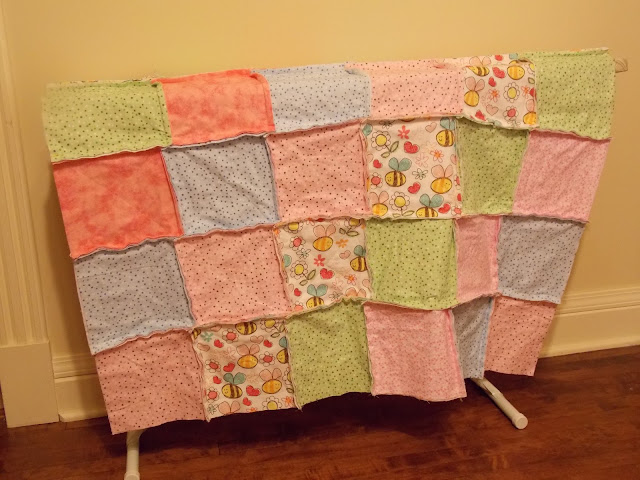 Enough slacking I need to get back to the machine. Don't forget 2/1/13 we have a bonus Blogger BOM with Jennifer from Knotted thread!!!


Linking it up to WIP Wednesday at Freshly Pieced....

Posted by PeachPatchQuilts at 9:32 PM 2 comments: 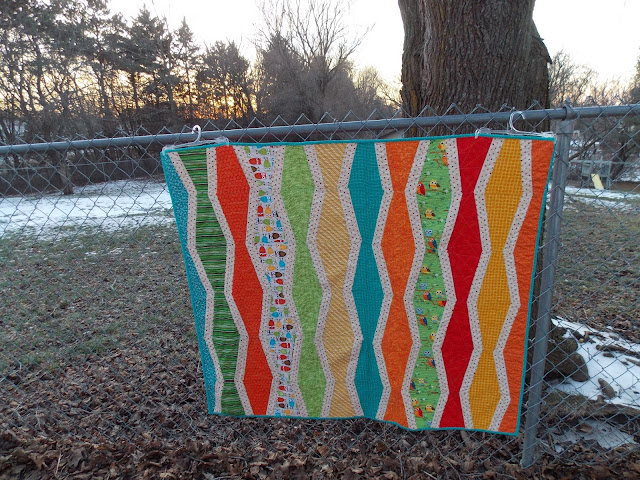 This one has been a long time in the making and is the 1st finish of 2013. This is for Megan's baby girl Marin. Megan didn't find out the gender of the baby before she was born. So as a result this was a gender neural baby quilt. I used several owl prints including Ten Little Things by Jenn Ski for Moda. Sadly the baby's grand mother made her a quilt as well with some prints from the same collection. Just goes to show you there aren't very many gender neutral baby prints. Anyway I didn't get this finished before the baby was born. She is getting big and cuter every day. 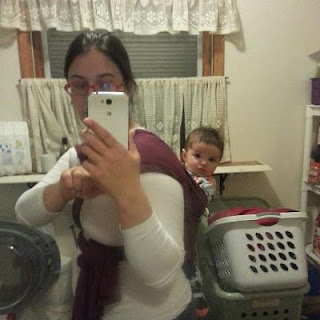 The pattern of the quilt is New Wave by Oh! Fransson. The quilting is a variety of free motion and regular stitching. I did something different in each section. Backing is red with a line of yellow owls ( I forgot to get some pictures of the back, it was cold and windy). Fabric is an assortment. I love the blue binding I think it brings it all together. Here is a little close up of the quilting. I used a variegated yellow thread. Glad to be done with this one and get it off in the mail to Megan and Marin! 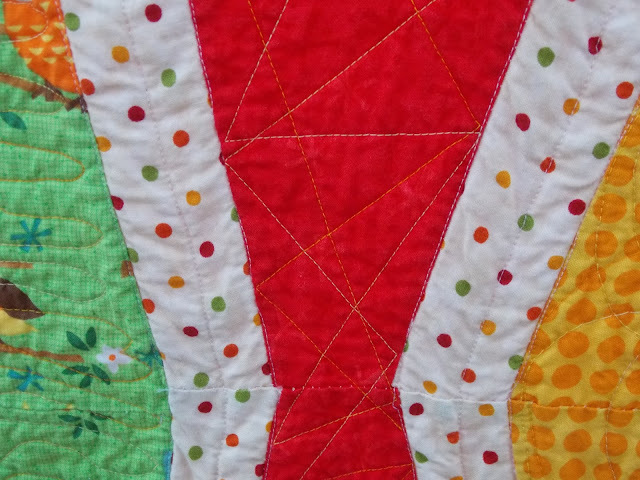 I am linking up to Crazy Mom Quilts, Finish it up Friday.
Don't forget about the give away here....
Posted by PeachPatchQuilts at 11:32 PM 5 comments:

Email ThisBlogThis!Share to TwitterShare to FacebookShare to Pinterest
Labels: Finished Quilts, Give Away, New Wave Quilt

The first step is admitting you have a problem.....

Lots has been going on during the last few weeks. I have been back at the homestead and have been stitching up a storm. Mostly due to my new fancy present from Papa Peach for our 3rd wedding anniversary and Christmas. 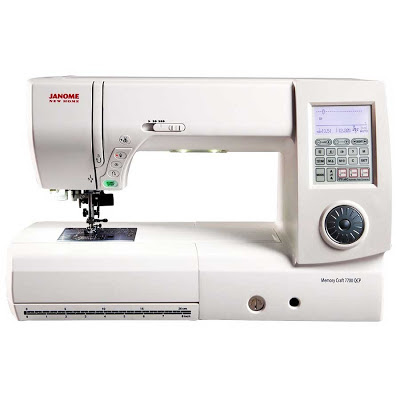 Although the 3rd anniversary is the leather anniversary and this is hardly leather I love it....and I can sew leather with it. He also got me a new leather purse to replace my badly worn out purse. We tried unsuccessfully to get the machine before Christmas. I originally was looking at the Janome 6600P. Could not get my hands on one before Christmas, they were sold out everywhere. I took it as a sign that I did not need a new machine. Papa Peach was not to be deterred. He was passing out my number to shops all over town to call when the machines came back in stock. Two Fridays ago I got a call that the machine was back in stock. We didn't have time to go to the shop before I headed off to Michigan last week. When I got back Papa Peach shuttled me to the store and it turned out that they were having a floor model sale. The 7700 included the table but the 6600 did not. They had just put the 7700 out on the floor less than a week ago. So it was barely used. Still a ridiculous amount of money to spend on a sewing machine. It was actually more expensive than my 1st car. But I do love it and it makes everything so much easier and I spend lot of time stitching. (There was a lot of justification to get this to the house!!!) I went with a Janome vs a Bernina due to the price of accessories. Bernina is krazy when it comes to buying accessories or replacement parts. 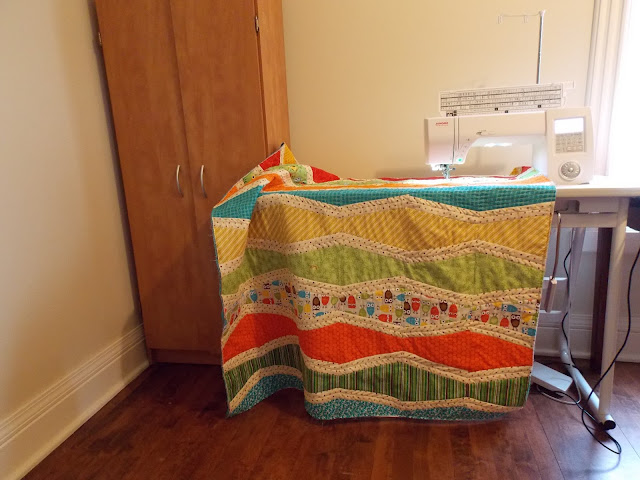 Another thing that has happened is that I annexed our sitting room to become my new sewing room. I used to use my office as an office/craft room. But it got to the point where there was too much fabric and I was tired of swapping out the Bernina with the laptop. We kicked the furniture out of this room and replaced it wit my new sewing machine and table, old fabric cabinet and old dining room table for cutting. Papa Peach also made me this fabric design wall (which was supposed to be my Christmas present). My office is still not being used as an office, just a fabric storage location until I can get some folding/sorting/organizing done. 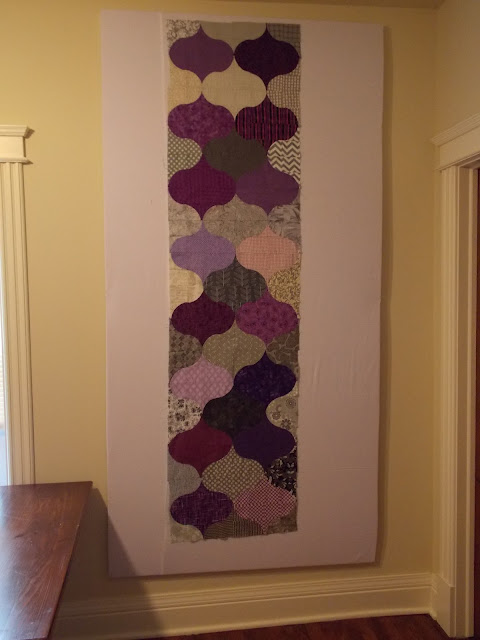 The quilt on the new design wall is a purple and grey quilt for my oldest step daughter Ellie. I am hoping to have it finished before she heads off to college in the fall. We made some miscalculations on the design wall and will be making two smaller 4'x4' design walls for the room as well.

Over the weekend we decided to get off of our bums and go for a bike ride. It being Wisconsin it is not often that we are given that opportunity in January. But the weather was "warm", I was feeling mega fluffy and I had not yet given up on my personal diet resolutions. We ended up biking a few miles on a trail in a town a couple miles away. After our short, nippy bike ride we found a quilt shop. This particular shop was going out of business since the woman was retiring and was open by appointment only. I made an appointment to come back the next day in the hopes of buying some fabric storage furniture. I instead bought this..... 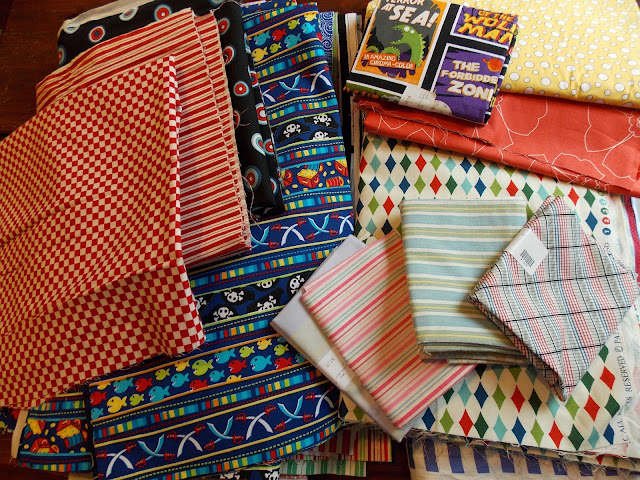 I don't know if you can appreciate what a shameful amount of fabric that is......By my count its over 60 yards. The blue and white stripe on the bottom is an entire bolt. (The first bolt I have ever bought) I was in such a fabric frenzy and the prices were 60% off. The bolt was clearance and then 60% off!!!! She also had some notions and patterns as well as finished quilts. She had a one yard minimum and still a pretty good selection. Oh well........If you are in the area and would like to buy up some goodies she is open til the end of January by appointment only. The name of the shop is the Backyard Quilt Shop.

This morning I got an email that I was the winner of one of the traveling stash boxes. Box #6 will be coming my way and I will be filling it with some of my newly found goodies. Last but not least don't forget that I have a give away going on check here if you want to win 100 pieces of candy. I am linking up to WIP Wednesday at Freshly Pieced.

Posted by PeachPatchQuilts at 6:52 PM 3 comments:

Today is the January installment of Blogger Block of The Month. Presenting today's block is Stefanie of Little Lady Patchwork. Here block this month is a great scrap buster called "Stacks & Stacks". This blocks is a great way to show your scrap bin who's boss and stick to any fabric purchase diets you may have this new year! The beautiful tutorial can be found on Stefanie's Blog. Check out this and her other great tutorials. Also she has a shop with one of my favorite line, Simply Color by V & Co!!!!! 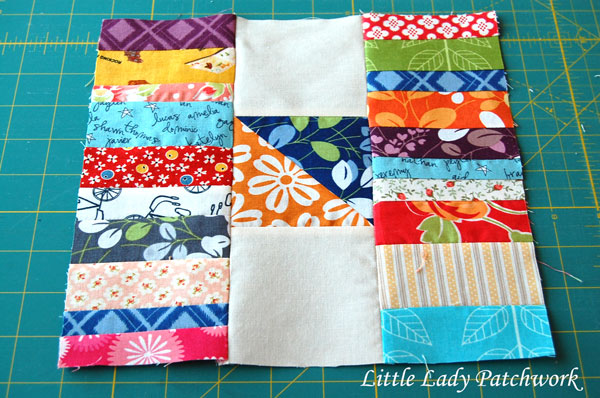 As always there is a super give away! To participate make sure you are a follower and leave a comment on what your quilting resolutions are this year. The winner will receive a pack of 100 delicious pieces of guilt free candy. ("Candy" is 2.5" square pieces of fabric great for all sorts of projects)
Give away open until 1/23/13! 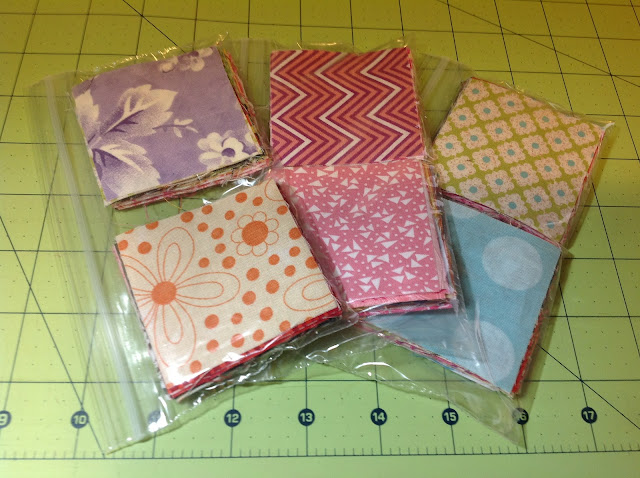 Here is a list of all the participants of the BOM


Here is a button you can grab and put on your blog to make sure you don't miss a single post.

Posted by PeachPatchQuilts at 8:41 AM 21 comments:

Email ThisBlogThis!Share to TwitterShare to FacebookShare to Pinterest
Labels: Block of the Month, blocks, Bloggers BOM, Give Away

Should old acquaintance be forgot, and never brought to mind ?

Today we wrap up the holiday season. I run pretty hard from Halloween until now and am ready to pack up the stockings. Many birthdays and holiday to celebrate. I got some lovely sewing related gifts this year, a new 12 pound box of mystery fabric from the fat quarter shop, which is always a treat. I also got a new Rowenta iron which was much needed as my old one was leaking like a sieve. I got a rolling bag for my sewing machine and a promise of a design wall from my hubby. While I was in Columbus for work after Christmas I bought myself this fat quarter pack as a late present from Santa. I don't normally buy fat quarter bundles. But this one was half off since it was "Christmas" fabric. I found it to be pretty neutral but wasn't going to argue. I also bought a yard of the zig zag and a yard of a grey snow flake print. 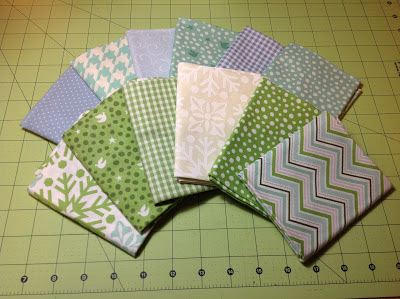 Today I was spending my day off making resolutions and sewing some blogger block of the month blocks. I caught up with my blocks and decided on the quilting front my resolution would be to complete 13 quilts in 2013. I have several in progress so I may be able to finish them up to boost the total. I don't know if it can be done but we will see this time next year.
Here are my November and December Blogger BOM blocks. Novembers post can be found here. Decembers post over here. These are my second group of Novembers blocks. I used all the same fabric for the non-fussy cut pieces. My blocks were a touch short. My seem allowances always require a little extra. December's block might be my favorite yet! It was so much fun to make. 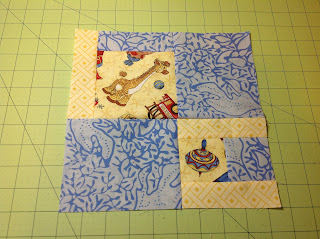 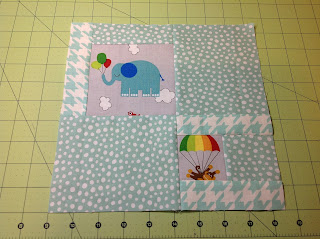 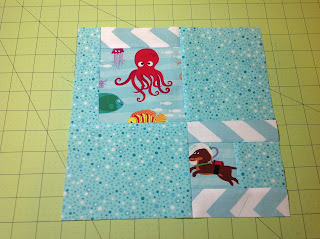 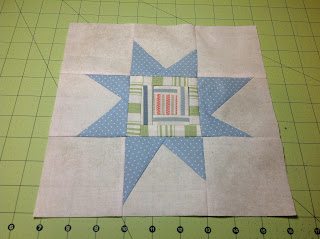 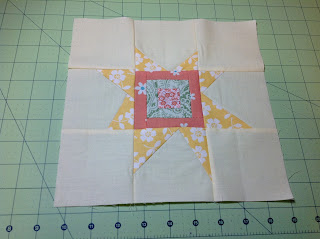 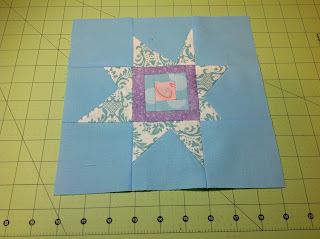 Posted by PeachPatchQuilts at 7:36 PM 4 comments: